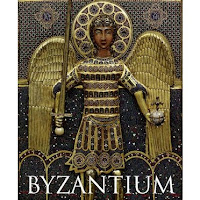 When people talk about too much complicated bureaucracy, they call it "byzantine." I always thought it referred to a period in history and the realm of Byzantium, or the area of the Roman empire during the Middle Ages, centred around Constantinople (modern Istanbul). But I now know it was invented to describe the complicated process for a foreigner to buy land in Greece.

I am a devout hellenophile so the nobler part of me is glad that the Greek government keeps such tight control on foreign ownership. But the larger more selfish part of me that longs to have roots in Greece wants to scream - HEY - Papandreou! It's ME! Nancy! Lighten up on the paperwork, will ya!"

For those of you interested (for reasons that escape me) on the convolutions of a non-EU citzen buying Greek property - here we go:

My first step was to get a Greek lawyer who will act as my power of attorney.

Next, everything in Greece apparently has to be notarized. Several times, several ways, in several versions, often. Get used to it. There is a lot of pomp and circumstance and the occupation of notary is pretty lucrative and pretty busy. It involves a LOT of documents, official looking rubber stamps, waiting in hot sweaty lobbies and dealing with earnest clerks. 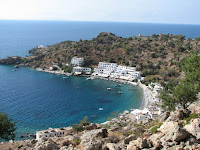 Then - I had to open a Greek bank account. Easy peasy - got the lawyer to do that. OH! But first, I need a Greek tax number. Lawyer again. Notarized the passport, times six. I am not making that up. Six copies.

BUT FIRST.... I need my national police (in my case the Mounties and Dudley Doright) to provide a criminal record check to the Greek Ministry of Defence. Since I boringly have a pristine criminal record, this takes about four months. And money - I had to get finger and palm printed (fee) and then send the mess off to Ottawa (another fee).

Then - because apparently the RCMP's word is not good enough, I have to write a statement that says, like Nixon, "I YAM NOT A CROOK." And, naturally get it notarized (fee) and translated (fee) by a translator approved by the Greek Embassy or Ministry.

I need an original copy of my birth certificate (fee) translated (fee), and then .... hey wake up! We've only just started!!! Stay with me.... I also include my personal biography and information on my parents and where they were born, information on my finances, and a brief essay on why I want to buy property in Greece. I have resisted the urge to write on the form - "why to have frequent licentious bacchanals of course!" 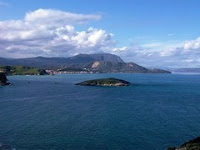 I then send the whole works off the Greek Embassy in Canada. It has to be translated you see. And then notarized. And THEN, I can send it to my Greek lawyer and HE sends it on to the Minister of Defense, who apparently has nothing better to do. Oh, and the lawyer has to get the land surveyed, get the specifics on the parcel of land, a topography map all of that certified, notarized and god knows what else. They also need to prove I am not near either a sensitive military zone or a protected natural area.

Still with me? Good.

Now, the hard part begins. I am told that the Minister keeps the application in his IN basket for about 8 months before stamping it approved.

So - minimum of 12 months. I could, I suppose speed the process up with a few bribes - but I'd rather not. So much for impulse shopping.

I am now on the second month of waiting for the RCMP to give me a clean criminal check. It's a little unsettling waiting for it.... trying to recall if I ever got busted for shoplifting a chocolate bar as s 10 year old or have an unpaid parking ticket. Or worse - identity theft - maybe somebody masquerading as me has been pulling off bank heists and jacking deer! Egad!

In the meantime, I can dreamily look at my Greek home decorating mags, moon over architects plans and figure out what I need to sell to afford this folly. 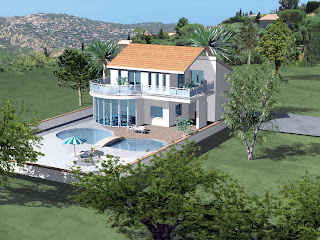 Email ThisBlogThis!Share to TwitterShare to FacebookShare to Pinterest
Labels: buying land in Greece