I’ve been unfaithful to you, dear reader. The blog this year has become a bit of a slog. Why? Well, quite honestly, I’m not doing anything terribly interesting that bears writing about. And, if we’re really being honest, I’m a bit blue and doing some really hard self-examination stuff about my purpose here in Greece and … well…. on the planet. 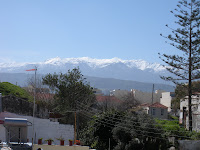 I arrived in Greece in mid-January prepared for another 90 days of sunshine. But in my three decades of visiting here, I’ve never seen such crummy weather! Rain almost every day – good god, we even had snow! What’s next - the Leafs winning the Stanley Cup? 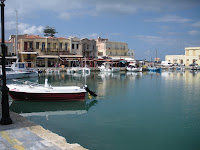 So, Ok. The point of these winter odysseys was to just live a regular life here and not as a tourist guest. - crummy weather and all. My days have been a boring routine of going to the market, making meals for one, walking along the ramparts of the city when the weather slackened off to a mere gale and mundane chores like laundry and cleaning. I am still working, cranking out grant proposals to keep starving musicians employed and that’s actually been a pleasant distraction. My new friends here pitch in every now and then and trot me out for coffee or dinner and even for a St. Patrick’s Day dance in the village. And of course, I’ve been coming closer, ever closer to finalizing the deal on my house building project.

Ahhh, the building project. And how is that coming along? Slowy, slowly, as the Greeks say. Let’s review: first I had to prove to the Greek Minister of Defense that I am neither a crook nor a money launderer. Apparently, this is giving him some pause, as he has had my paperwork now for about six months.

All normal, my Greek friends tell me. In fact, by Greek bureaucratic standards, this qualifies as clipping right along briskly.

In the meantime, I’ve been driving around the island with the ever patient Andreas looking at architectural styles and features to get some vague idea of what I want in a house. I’m a blank canvas – all I know is that I want a really cool house that has some style and elegance and will be comfortable as I get older and creakier. I count on Andreas, who is more of a visionary than I (and frankly has better taste) to steer me in the right direction. “The blue shutters? Really? No, I don’t THINK so,” he tuts. 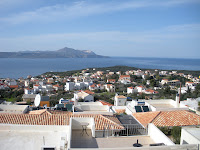 All I know is that I don’t want an ultra modern concrete cube, like some of the characterless holiday homes I see piled on top of each other here. And I don’t want a traditional white village house that reeks of cute. Chic, I aren’t and quaint, I ain’t. Other than that, I am wide open to ideas. You can imagine how frustrating this will be for my architect.

Today I meet with a project engineer to start sketching out some plans so we can be ready to jump, er, saunter – when the approval from Athens comes through. Then we can apply for building permits – which take several more months. I won’t see ground broken til late fall I’m told… a full 15 months after starting the process. In the meantime, I will use the time here to pick out marble tiles, the perfect bathroom fixtures, and select windows and flooring. 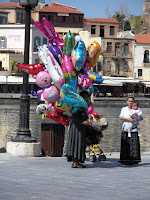 Next week, I am moving from the lovely city of Chania to the resort village of Almyrida to be closer to new friends and to the village where I am building. With a car, I can putter around the back roads and get to know my new neighbourhood better. I promise to get back on track with funny stories, great recipes (Easter lamb – Yum!), endearing cultural quirks and a minimal amount of whining about my life. Promise.
Posted by Bloozebabe at 11:33 AM