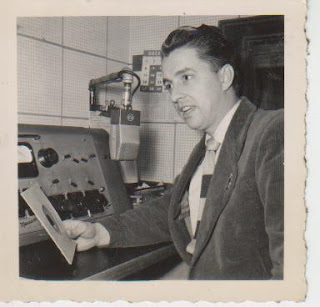 I’ll admit it - I’m a news addict. I come by it naturally. My beloved dad was a broadcaster in both radio and TV for 50 years. As a teenager, he hung around the local radio station until they gave him a job. From those early days as a radio operator, he quickly grew into an on-air “personality” and eventually management. Midway in his career, he switched from private broadcasting to Canada’s public system, the CBC. Widowed early, Dad often needed to bring me along to the radio or TV studio when babysitters were hard to find. I grew up spending a lot of time sitting quietly in a broadcast booth or TV studio while dear old dad was “live on air.” The addiction was born. Radio was always on in our home and Dad taught me what made a good broadcast or how to recognize a talented announcer. 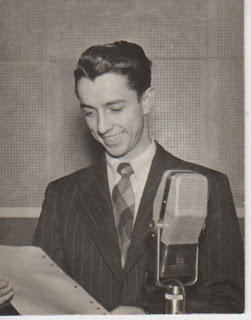 To this day, I can’t miss a newscast on radio or TV. The CBC encourages a lot of audience participation these days – their way of making the audience do the work of programming since the government has slashed their funding for production. So, I do my part by contributing to radio shows as an occasional guest commentator or by providing feedback on issues raised. I’m still good friends with a lot of the announcers my dad worked with or hired and the career I’ve had in the last few decades has had me building strong media relations.

So how do I stay connected when I’m living in Greece? Well the internet allows me to listen to or watch live broadcasts from home – with a 6 hour time difference. It’s very comforting - like having a coffee with a pal and having a good gab about local politics (thanks Terry and Stan). It’s also led to some really cool experiences.

For example, one day I was exchanging tweets with a friend back home while I was listening to the local morning show and pruning back my jasmine in the hot Greek sunshine. They announced a school closure due to a vicious winter blizzard. I knew about it before he did. We both got chills from the weirdness of me knowing that his kid had a storm day from half a world away before mum and dad even rolled out of bed.

The same local morning show maintains a live Twitter feed while broadcasting and they respond to incoming emails. So when the announcer is saying it’s minus 25 in Fredericton, I can shoot him a note and say it’s plus 30 in Chania and I’m off to the beach - sucks being meeee. They usually read it on air and get a lot of mileage out of bad weather jokes. But besides bad jokes, this past winter, it also meant that I was their closest connection to what was happening in Libya. I could relate my experience of meeting the refuges that had been evacuated to Greece directly on air to the folks at home. I could talk about how chilling it was to meet the young NATO airforce pilots one night in a taverna and then watch their jets whistle overhead on their way to bomb Libyan towns. And of course, this past autumn, I’ve had a front row seat watching an entire nation’s economy disintegrate. 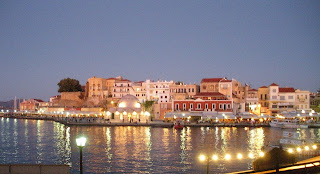 Now that I am back in Canada for a few months, I read the Greek newspapers on line every day and watch the BBC broadcasts live streaming. A live web cam over the city of Chania lets me know what their day is like. Last year, in my ultimate act of geekdom, I watched Chania’s New Years Eve fireworks live on the web cam.

I love my life in Greece; I adore my Canadian home. The amazing power of the internet keeps me connected to both worlds.
Posted by Bloozebabe at 7:54 PM