Crete – the crossroads of history 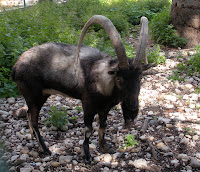 I’m not a professional writer, but I adore words and writing and I guess I DO actually make my living by stringing the right words together. I try to avoid clichés – it is a point of pride for me that I wrote press releases for four different elections, both federal and provincial, announcing each candidate’s bid for a seat and NEVER ONCE used the tired cliché – “tossed his hat into the ring.’ That’s – let me see … doing the math….. about 237 press releases for each candidate’s announcement sans cliché. Now THAT, my friends, is wordsmithing glory. 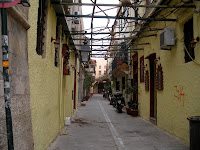 But Crete and Greece can’t help but inspire clichés… azure seas, sun-baked beaches, deep-fried tourists… you get the idea. I am trying to avoid most of them in this blog, but here is one I can’t seem to get around: Crete is indeed a crossroads of history, of continents and cultures. 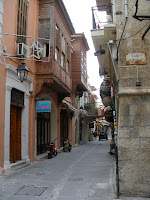 Swaddled by the Libyan Sea, the Cretan Sea, the Mediterranean and - farther out - the Aegean, Crete was an inevitable magnet and staging ground for a millennia of conquerors – from the earliest times – the Minoans, Myceneans, the mysterious Dorian invaders, Romans, Turks, Saracens, Venetians, to the last century’s Russians and Germans. And they’ve all left their mark in architecture, in food, art, culture and a gut wrenching history of battles, inhuman slaughter and heartbreak. Today as I write this, American jets are blistering noisily across my “azure” sky, launched presumably from those big carriers off shore. This lovely island is an important piece of real estate in the machinations of world politics, past and present. Crete has been so brutalized by turbulent history that the Cretans can seem quite guarded and insular, understandably so. They view themselves as Cretans - not Greeks. 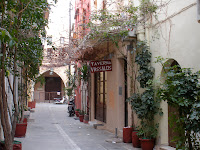 I live in the part of North America that is considered “historic.” We are smug about our “old” houses dating back to the late 1600’s and I’ve worked on archaeological sites dating back about 6,000 years. Pffffft…. here, in Crete, I am living in a 600 year old Venetian building and look out my window at a mosque built in 1645 and at the dome of a church begun in 1320. My laundry room entrance is through an exquisite Venetian arch and I hang my smalls to dry on a marble balcony used by Marco Polo’s contemporaries. The mind boggles.

This past weekend I hopped the local bus for a short trip along the coast to the town of Rethymno. It’s fun doing this – I throw my jammies, some clean undies and a toothbrush in a light shoulder bag and off I go. The local bus is a cheap and really comfortable way to explore the small villages. No luggage to drag around; makes me feel free and quite intrepid. They haven’t had significant earthquakes there so much of their stunning Venetian architecture is still intact, including the magnificent massive Fortezza guarding the town. East meets west here for sure, with lots of Turkish mosques and minarets intact and the lovely Venetian houses, fountains, and palazzos. My hotel was the exquisite Veneto Executive Suites (www.veneto.gr) – a 14th century manor house, replete with sweeping marble staircases, indoor tinkling fountains, a serious wine cellar, flower draped balconies, stone archways and modern plumbing. 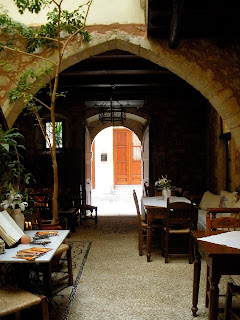 In the Old Town, some of the narrow winding streets are reminiscent of the real Venice (without the stinking canals and rude tourists), with the enclosed wooden balconies (sachnisia) and stonework. Lots of cafes and restaurants, interesting shops, museums, the Fortezza, and a pretty harbour front walk make Rethymno a lovely spot to visit. It was fairly deserted of tourists in late February and it is quiet on the weekend, but I expect it rocks in high season. Which is why I am here now :) 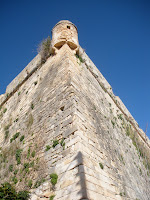 I walked the hell out of that town during my weekend there. My arthritis was screeching, but it felt fantastic to just get out and roam on my own. When I had enough (and my knees protested loudly), I once again hopped the local bus and made the 45 minute coastal drive back to Chania. Next week: Heraklion and the archaeological sites. 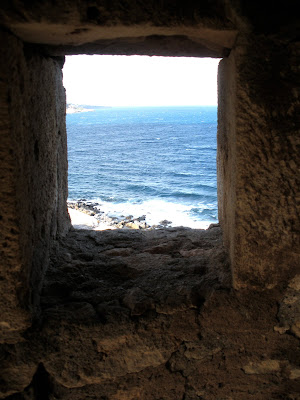 Posted by Bloozebabe at 4:09 PM