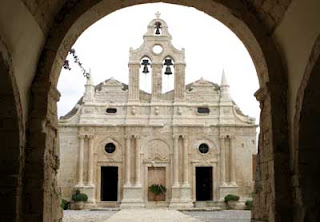 No one knows for sure when it was founded, but it is believed that the Arkadi Monastery may date between 950 and 1200 AD. In Venetian times, the monastery housed as many as 300 monks in its precincts.

In 1866, when the Cretan revolt broke out, 1500 of the leaders gathered there to plot the rebellion. The Turkish pasha in Rethymno set out a force of 15,000 with 30 cannon to nip the rebellion in the bud. The local people and rebels barricaded themselves inside the monastery – some 260 men and over 700 women and children. The Turks encircled the monastery and the Cretan situation became hopeless. The abbot gathered the women and children inside the powder magazine where they chose to blow themselves up rather than surrender to the Turks.

The rebels fought bravely and held the Turks off another day. But eventually the walls were breached. Only three or four managed to escape the slaughter that followed. The pasha believed that this put an end to the rebellion and taught the Cretans a lesson, but it only served to inspire the freedom fighters to continue. Crete finally won its autonomy in 1898. 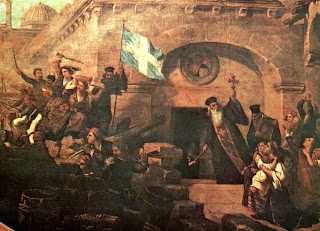 Posted by Bloozebabe at 5:20 PM