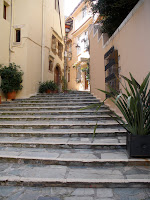 Blame Auntie Pauline. I got this yen for traveling at her knee. All those damned slide shows from Uncle Warren - “ahhhh yes, and this is the ruins of Chalcis, note the happy beggars.”

When I was about 16, old enough that my Dad had some confidence in me, and I had some basic common sense, I started my solo travel. First to Europe, then the Middle East, Northern Africa and eventually to the Caribbean, Polynesia and Central America. In my second year of university, my fairy godmother/professor waved her magic wand and the next thing I knew, I was studying archaeology in Rome. In fact, I turned 18 in Rome. Now that I’m older and wiser, I am in awe of my father’s bravery in sending his little girl off to a foreign country to live. Such courage on his part; such blithe and blissful ignorance on mine.

Sure I’ve had great fun traveling with friends, but it seemed that whenever I had the money and the time, they didn’t. So, I had to choose between waiting around for them or just – go on my own.

As a young woman, it was an adventure. Being a “scholar” had a certain cachet and got me out of a few jams. Then came those years when I had to know when to convincingly deliver the I’m-so-sorry-I have-a headache line (and when NOT to) in any number of languages - to amorous lotharios. Later, I'll tell you about the Kamaki King contest in Skiathos.

The Greeks are always astonished that I travel alone, but terribly moved that I keep coming back to visit their country. When I was younger, I used to find myself inventing excuses why I was alone or – worse – inventing an imaginary husband and 3 strapping sons. Now that I am 50, I am not compelled to make the same excuses. Now, I have to polish the I-really-don’t-want-a younger-lover- story. Traveling alone means you have to figure stuff out on your own; you have no one to consult with on the road less traveled and no one to watch your oversized suitcase while you nip over to the kiosk to get some gum. (*TIP: traveling solo means you learn to travel light!)

Solo travel has its challenges and lonely moments, but it also has a lot of freedom. I sleep in if I want to and I often have an agenda of what I’m NOT going to do today. For example, today – I am not going to the museum. I am also not going to see the archaeological ruins of the temple and, if I can possibly squeeze it in, I am not going to the local art gallery. 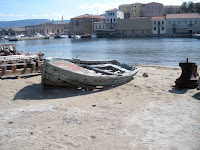 Today, I am going to sit in the café, eat fresh pistachios, drink a carafe of local barrel wine, read the Guardian and watch the world go by – and not answer to anyone or follow anyone else’s “if-it’s-Tuesday-it-must-be-Belgium” agenda.
Posted by Bloozebabe at 12:25 PM