Need something? Anything? Anything at all? Then get familiar with the Greek periptero. These tiny little kiosks are on every street in Greece. The word "periptero" translates to something like "walk around" (I think - been a while since I studied my Greek) although it also refers to a style of temple architecture. In any event, they are manned pretty much round the clock and they have EVERYTHING you would ever need - from cigs to condoms, orange juice to gum, newspapers, pens, chips, phone cards, chocolate, belts and sunglasses - even Pampers and Advil!

The periptero is precisely as wide as a Greek grandfather's shoulders and about as tall. For that is usually who staffs these wonders of convenience - a great mustachioed grandfather or his equally grandly mustachioed wife - Yia-Yia - or sometimes by a 9 year old kid on school break who speaks better English than I and is clearly headed for a career in entrepreneurship.

Which brings me, dear readers, to our first Greek lesson... I was swanning through the island of Paros with my dear buddy, sidekick and duenna Carol and I had run out of those little packets of tissues that one needs when traveling to deal with the dreadful cold that you will inevitably catch from rotten airline air. A visit to the periptero was in order to re-stock.

We were in the absolutely visually luscious village of Naoussa and I found a periptero - and yes, the ancient craggy faced grandpa was squished inside the booth. Now, for reasons that escape me, I actually DID study Greek for about 6 years. But Homer, Xenophon and Thucydides never actually covered the word for paper tissue.

I approached the booth tentatively, smiled gamely at grandpa and made great gestures about sneezing and honking into an imaginary hanky. He looked puzzled. I flapped my arms some more, mimed bigger sneezes, pointed to my red nose and smiled winningly. Nope.... hmmmmmm. Aha, sez I - digging out my old tattered packet from my purse like a miner finding a nugget of gold! He grinned, flashing a pretty impressive gold tooth, and handed me a packet of tissues with a flourish. YESSSSSS! or rather, Neh, NEH (Greek for "yup - you betcha!")

Flushed with success, I then attempted to expand our dialogue. "What, said I, "do you call these in Greek?"

He beckoned me closer, pursed his lips and said slowly, as if to a backward and somewhat dim child.... "KLEEEEEE-NEX." And then the old bugger laughed so hard he almost knocked his kiosk over.

Carol wandered over from the nearby postcard rack.... "Get your Kleenex?" "Oh sure... nothing to it... my Greek is all coming back to me." 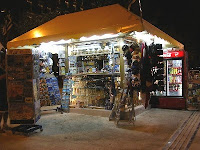