Technology in a 15th Century villa 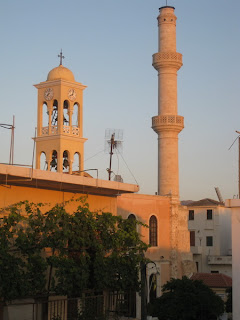 The first glitch - well, OK the second - I'll tell you about the Schengen visa another time - has reared its ugly head. I've spent the last two months looking for just the 'right' apartment to lease for my stay in Greece this winter. Main criteria - had to have high speed internet so I could do my work. Heat would be nice too. Other than that, I wasn't too picky. So I found my little apartment in Chania - in a building dating from the 15th century - renovated, with all the mod cons. Sorta.

Tassos, my genial landlord, swore I would have internet installed and waiting for my arrival. He should have known better - Hell, I should have known better. It takes at least a month to get a telephone hook up in Greece - officially. Then there are the holy days, name days, feasts, sheep festivals and god knows what else that delays the process.

I am putting my faith in Tassos, OTE, the Greek telephone company and the god Hermes to get me my connection. Fall back, I can work off line and upload my work at a dreaded internet cafe.... or Tasso's office - I'll sweet talk him. The Greeks aren't the only race with silver tongues.

Fun fact about my apartment - it's in the old Turkish quarter, overlooking a mosque and minaret built during the time of the invasion..... and apparently conveniently located next door to the red light district.

Well, I HAD hoped to get a part time job.... wondering if I can summon up my limited modern Greek to say "'Ello, 'ello 'ello, fancy a shag!"
Posted by Bloozebabe at 3:24 AM